I was responsible for the creation of the college mascot, "Randy Robo-Tech." Randy began his life as a virtual mascot to be used in a variety of marketing applications.

Randy Biggs and I came up with idea to have a contest within our 3D Animation program to select a team of 3D artists for the creation of a technology based mascot. Brady Dalton was selected as the winner, and we set out to create a character in 3D Studio Max for the purpose of giving the school's brand a face and personallity.

Brady Dalton was the student team leader under the multimedia instructor Rex Thornock on the virtual development. Brady was truly the creative force behind the animation segments under my art direction. I contributed the background animation bits and the voice over for the work.

"Randy Robo-Tech" was named in honor and memory of Randy Biggs. The virtual version was such a success that the following year I was tasked with creating a mascot suit that could be worn by a someone representing the college in parades, award ceremonies, and other public events.

I contracted Jennifer McGrew, a costume and set designer from Salt Lake City, for the Randy suit. The Automated Manufacturing Department built in the wireless electronic communication system and voice modulator for Randy.

These efforts played a large roll in me getting nominated and selected as the recipient for
the Ogden City Mayor's Award for the Arts in the Design Disclipine. 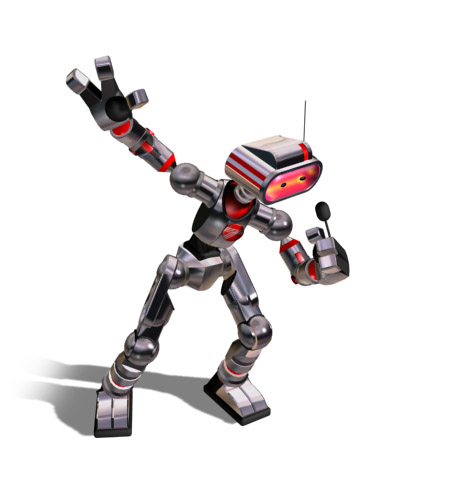 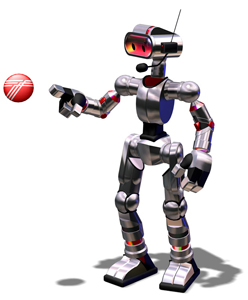 AVI Animations may take a moment to play depending on your connection speed.

As the Visual Communications Coordinator/Webmaster for the college, I managed all marketing communications needs for over 60 programs organized into five schools. My team consisted of two-six direct reports full and part-time, internal project teams/resources, external contract resources, and senior level students seeking on the job training in the design, and programming fields.

I worked in tandem with a Marketing/Public Relations Team under the direction of the Vice President of Student Services. Our overall departmental mission was student recruitment and retention while maintaining academic excellence within the community. During my time on staff,

I participated in the transition of the school from the status of a vocational training facility to a fully accredited two-year college. Moving from the Technical/Vocational educational environment to the Higher Education (Board of Regents,) becoming the largest campus in the Utah College of Applied Technology (UCAT) system and statistically the largest college in the State of Utah.